After decades of being left out of the spotlight, Labrador Inuit art is being seen and experienced like never before. Soon a much wider audience will get to see just what makes Inuit art from Labrador unique.

This newly forming visibility is the theme for the exhibition SakKijâjuk: Art and Craft from Nunatsiavut, which will open at The Rooms Provincial Gallery in October 2016, and will coincide with the kick off of the 20th biennial Inuit Studies Conference in St John’s. SakKijâjuk is a Labrador Inuktitut word meaning “to be seen, to be visible.” Curator, Heather Igloliorte, is hoping this exciting exhibit, featuring a variety of works that tell the story of Labrador Inuit, will do just that.

“It means a lot that the grand opening will be at The Rooms Provincial Art Gallery,” says a visibly thrilled Igloliorte. “I think this is extremely exciting because we expect that many visitors will not even know that we have artists in Nunatsiavut, because they have been entirely left out of the national Inuit art scene. So here we have an opportunity to show forty years of art and craft work as well as a really vibrant contemporary art scene.”

Igloliorte, who is herself Nunatsiavummiut, and an Assistant Professor of Art History at Montreal’s Concordia University, explains that there will be wide range of art and crafts from Nunatsiavut, including traditional items like soapstone carvings, basket weaving, sealskin clothing, and embroidery coupled with contemporary works of photography, paintings, and video.

“Inuit artists from Nunatsiavut are, I believe, on the cutting edge of contemporary Inuit art as well, and I think that it’s going to be exciting!” exclaims Igloliorte. “We want people to learn about our emerging artists, our contemporary artists and craftspeople, and also our senior artists and elders as well. A lot of history is included in this 80-work exhibit.”

The exhibition was years in the making as Igloliorte worked with the Nunatsiavut Government to hold an earlier exhibition of Labrador Inuit Art in Happy Valley-Goose Bay in November 2015. Many of the works from that exhibition were selected, and dozens more were added to form SakKijâjuk.

Igloliorte hopes that the exhibition will help visitors to better understand Labrador Inuit culture, no matter where they are from. “The artworks are very reflective of our history and culture. Some of the works in the show speak to life in Nunatsiavut - Samantha Jacque's photography of sled-dog races, or the kamiks [traditional seal skin boots] from each community,”

Even though Newfoundland and Labrador are two parts of the same province, Igloliorte is sometimes dismayed by the lack of understanding of Labrador Inuit on the island of Newfoundland, but she hopes that this exhibit will help increase understanding about her home and culture across the province. “In Labrador we sometimes feel like we are cut off from the rest of the province, or that we don't share the stage equally with the island,” says Igloliorte. “This year we hope that Nunatsiavut artists will finally gain both the provincial and national recognition that they deserve. The Rooms is really committed to sharing their platform with Labrador artists too.”

She explains that Labrador Inuit were not recognized when Newfoundland and Labrador joined Canada in 1949, at the same time the Canadian Inuit Art movement began to pick up steam in the far North. It would be over 40 years until Labrador Inuit art was recognized as “authentic.” According to Igloliorte, being left out in the cold has, in some ways, meant that Labrador Inuit artists did not have to constrain themselves the way other Inuit artists in the North had to. Igloliorte believes that the tastes of the Southern buyers and European art markets shaped the nascent Inuit art industry, even to point of shoehorning it into a very specific set of qualities.

While there are definitely recognizable Labrador Inuit artists, with works in galleries and private collections around the world, Igloliorte says that it was much more difficult for them without the funding and support artists from other regions received. They are recognized as individual artists as opposed to representatives and ambassadors of their region. “While Inuit art from across Canada has been widely acclaimed and celebrated for about six decades, in that same period,” Igloliorte explains, “Labrador Inuit artists were essentially working in isolation. Even our more 'famous' artists became so in spite of the art market, not because of it.”

The exhibition, featuring over 80 pieces of Labrador Inuit art and crafts, will remain at The Rooms until next year, at which point it will begin traveling to other galleries and museums across the country. Igloliorte says that the venues are not public yet, but will be soon. “We are still finalizing the tour schedule so I can't yet say what happens next,” says Igloliorte with glee, “you'll have to wait for the big announcement! I will say we are in the process of developing a major catalogue that will be produced in three languages and full colour, which will come out in time for Christmas and the finnesage of the exhibition"

SakKijâjuk: Art and Craft from Nunatsiavut opens at The Rooms Provincial Gallery October 7, 2016 and runs until early 2017. 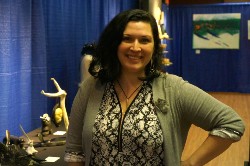